Just when you think it is safe to go back into the water…
It can be scary out there.
I just returned from Black Hat 2016 conference at Mandalay Bay Conference Center in Las Vegas, Nevada. I was working in the trade show booth of a company by the name of Absolute. They help protect any device, data, and applications that you might use.

My task was to draw a crowd to the trade show booth, entertain them, provide them with the company’s message utilizing my magic and pickpocket skills, qualify them and then turn them over to the booth staff so they could get their questions answered. 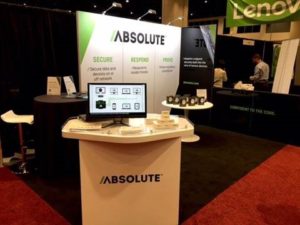 You have probably heard it said, “discretion is the better part of valor”. As many of you are aware of (or have experienced firsthand), I can take the watch off of someone without them knowing. For the second time in my life, I decided not to take the watch off of certain people. When you have some of the best hackers from around the world, who could quickly ruin your life in a matter of minutes, you may want to avoid taking their things. That thought crossed my mind as I met some of these people.
When I decided to print my boarding pass at the business center in the hotel I was staying in, I saw four keyboards and monitors. The first three had the screen upside down. The fourth looked fine – Until I started to type on the keyboard, only to find the hacker had disabled the keyboard. Both fairly simple tasks, yet a reminder that there are people out there who have nothing better to do than cause a lot of people a lot of lost time, money and effort.

A similar feeling came over me at the “Security Awareness Symposium” held a few years ago at the military base in Dahlgren, Virginia. I was one of four speakers on the program. One of the speakers was speaking on Social Engineering. In looking around the room, I noticed a gentleman with a very nice, very expensive watch. Traditionally, the more expensive the watch I lift, the more impressed people are with my talents.

As it happened, the man whose watch I had been admiring was one of the speakers. I was lucky enough to find that out when he went on to speak before I did. I use the word lucky, because after watching his presentation and how he could hack all of your social media, websites, personal accounts, etc., I felt lucky I hadn’t messed with his watch or valuables earlier. He could do serious harm to your life in less than 5 minutes. He could probably use the line I often use: ” I have ways of getting even you wouldn’t even dream of”.

People often comment, after hearing me speak or seeing what I do, that they walk through the airport differently going back home than they did coming to the event. If so, I have done my job. So, I will look forward to “bumping” into you at the airport sometime. (I hang around a lot of airports.)